Did you know Ellis Alley, one of the city’s first Black American settlements, is known as the birthplace from which the east side of San Antonio developed? And today, St. Paul Square, named after one of the oldest African-American churches in town, is a bustling dining and entertainment district. Nearby Dignowity Hill, two miles east of downtown, is considered the city’s oldest elite residential suburb. Walk or ride to St. Paul Square, named after one of the oldest African-American churches in town, to dine, shop and explore attractions in restored historic buildings.  For feeding a group, head to Big Lou’s Pizza for their famous 62” pizza. Experience authentic soul food at Mrs. Kitchen, where every menu item is made from scratch, devour tacos Mittman Fine Foods, or grab a Texas-sized smoked meat sandwich at Dignowity Meats. Get active on the Salado Creek greenway, take a yoga class atop Hays Street Bridge, then grab a tasting flight of locally brewed beer at Alamo Beer Company. Drive to Sullivan Park to check out a 32-foot-tall, orange sculpture of an open hand called “Open Hand, Open Mind, Open Heart” that’s dedicated to Martin Luther King, Jr. Root for the San Antonio Spurs at the AT&T Center, catch your favorite artist in concert at the Alamodome, or experience local cultural events at The Carver Community Cultural Center. Explore jaw-dropping pieces of art from muralists from around the world at Essex Modern City. Take in the beauty of the “Spheres of Reflection” sculpture by local artist Kaldric Dow at Martin Luther King Park. Come explore what is new on the Eastside. Stay in central or east downtown to experience historic hotels with world-class customer service. Consider options that are walking distance from your planned attractions for a full urban experience. Or, rent a historic home in nearby Dignowity Hill for more space right near all the action. Grab the best fried chicken around at Chatman’s. Or, dive into a Texas-sized BBQ sandwich at Dignowity Meats. For a vegetarian’s paradise, check out Sweet Yams on Cherry St. And, for San Antonio’s famous tamales, don’t miss local staple, Ruben’s Homemade Tamales. Explore the ever-changing Dignowity Hill district – filled with history and booming with new local eateries and dive bars. Take a yoga class on the Hays Street Bridge. Then, just below the bridge, grab a local craft at Alamo Beer Brewery. Check out the historic site around St. Paul Square. And, catch a Spurs game at the AT&T Center nearby. 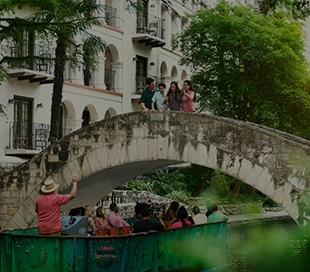