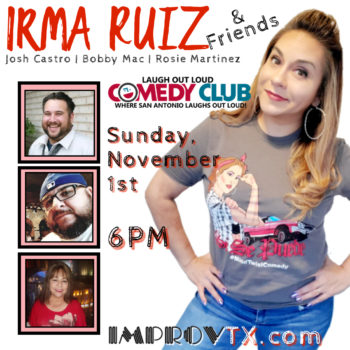 Irma Ruiz is a former wannabe chola, turned school teacher, turned comedian. Although she’s been kicked out of every neighborhood Nextdoor.com group she’s joined and is banned from 5 Facebook Mom groups, you can still find her performing in comedy clubs, casinos & festivals in Texas and various locations throughout the nation. Her comedy covers motherhood, education, marriage, family and more. She is the producer of the Teachers Gone Bad Show and even though she doesn’t believe in tarot cards, she pretends to in her Tarot Card Comedy Show on VivaLiveTv. Her comedy is not to be missed!